Toward the end of 2019, after caring for Isabel at home for close to 10 years, I realized I could no longer provide the care she now needed. I followed our geriatrician’s advice and decided to place Isabel in a long-term care (LTC) home. Easy to say…not easy to do.

The worst day of our lives was when Isabel lost her driving license 10 years ago. The second worst was when I left her, alone, at an LTC home. There were tears as we said goodbye on opposite sides of the glass door.

That was August 20, 2019. Since then, Isabel has been in four LTCs, and I feel I’ve been through the pandemic wringer with the health authority turning the handle.

The first three months were quite normal, and visitation at this first LTC was without difficulty. However, in December 2019 we decided to move Isabel to a better place, knowing full well that such moves can be problematic.

Thankfully, though, she settled into the next LTC home fairly easily. We had previously arranged to have a case manager through our provincial health authority, as it was necessary to have Isabel’s condition assessed before being placed on the public care home waitlist. Eventually, her name was placed on the list – with us only to be told that the wait time would be one to two years!

The first, as you know, is that COVID-19 had arrived in Canada, and with it all the confusion and stress of rules and restrictions to deal with the pandemic.

The second is that Isabel suffered an unwitnessed fall and broke her hip. At that time, she was still quite mobile and had no difficulty walking without support, so a fall like this was potentially devastating.

Isabel was taken to hospital where she had immediate surgery and then remained for a month recuperating.

The hospital stay: More barriers, but positive news, too

However, COVID-19 protections had caused all kinds of restrictions, rules and regulations as the province began to deal with that situation. This led to numerous administrative issues for the provincial health authority – which in turn caused numerous challenges for our family.

I was allowed to visit the hospital, but only by appointment and only for a limited period of time. Visiting Isabel in the hospital was deeply difficult and was restricted to just my daughter and I.

However, despite these issues there was some good news! Isabel and I became great-grandparents to our first great-granddaughter, Charlotte Isabel! Finding ways to be flexible, we worked around the Covid restrictions at the hospital by taking Isabel outdoors where she could meet our family and see her great-granddaughter.

Eventually, after a month of post-surgery care and rehabilitation, the hospital pronounced Isabel fit to move, although she was still a high fall risk.

Then another problem arose while Isabel had been staying at the hospital, she had (for some unexplained reason and unbeknownst to us) been taken off the public care home list! As a result, Isabel had slipped well down the priority list for LTC.

I couldn’t understand how it happened – I still don’t. The management of the waitlist was always a bit of a mystery. Isabel had been assessed a number of times to make sure she qualified as a case for placement. But we never knew where she actually was on that list. Clearly, it was important to be on the list, otherwise we would continue to pay exorbitant fees at a private facility.

You will likely understand that my initial feeling, after being told that Isabel had been taken off the public care home list – while she was still in hospital! –  was anger. It’s incredible that the health authority would do such a thing at a time of significant need without so much an explanation.

Communication was dreadful; it was impossible to find out who had made that decision. Even more incredible is the fact that no one had a recommendation, not even a suggestion, as to what we should do next. We really were left on our own.

Frustration became my next emotion. It was left up to us, the family, to find an appropriate placement for Isabel. Unfortunately, the home she had been at previously refused to take her back. They had a “no restraints” policy and insufficient staff to protect her.

Because Isabel was such a high fall risk, there were not many LTC homes willing to take her and provide the necessary care. Imagine being in this position: We could not explain to Isabel what was happening and she became very confused and upset. This was a very trying time for me, for my family and for Isabel. Frankly, there was no support from our medical system. I’m still saddened by the whole episode.

What to do? Well, we eventually found a suitable private LTC home willing to accept Isabel and provide a safe place for her to recuperate. We stressed that we wanted Isabel to walk again, and that she would need physio.

She had received some therapy at the hospital, but it wasn’t a priority for the staff there, and COVID-19 protections provided another layer of complexity that prevented Isabel from receiving more attention.

The move to the new LTC home was quite traumatic for our family, and especially for Isabel. By this time, COVID-19 was in full swing and the LTC home applied the provincial restrictions and protections in a very strict manner.

Initially, I was not allowed to visit this new home, and it took weeks before our request for essential visitor status was granted. Isabel, in the meantime, was introduced to new, unfamiliar faces in new surroundings. With no one who was familiar with her and no one she could rely on for comfort and support, she reacted aggressively as her condition declined.

It soon became clear that this LTC home had little interest in wanting to help Isabel walk again. We were adamant, hiring a private physiotherapist to assist us in this effort. We even had to flaunt the rules on occasion to get Isabel the help she needed.

Our perseverance eventually succeeded in getting Isabel walking again without assistance. We know this is a rare success story, and it says so much for her grit and determination.

Finally, in November 2020, we were offered a spot in a public LTC home. Thank goodness! This would be her last move.

Of course, the pandemic was still a huge factor and we had to go through the same routine of requesting (and begging for, it felt like) essential visitor status for me and my daughter.

We were refused essential-visitor status many times and could only visit Isabel through the home’s double windows. This was so completely unsuccessful, and so stressful and painful for both Isabel and our family, that we soon discontinued trying this.

Social interaction is vital for the well-being of people living with Alzheimer’s disease. Researchers have found that one of the significant risk factors for dementia is social isolation. Yet, time and again, we were refused visitation requests.

Finally, in desperation, we contacted the Office of the Seniors Advocate and it added its support to our request. Suddenly, we were granted essential- and designated-visitor status, and we were allowed to visit Isabel.

The whole process of getting visitor status was difficult beyond words – and, sadly, it continues to be that way for thousands of people. The Ministry of Health’s pandemic-protection rules change frequently, then get interpreted differently by each LTC home. The only approach that worked? Being the squeaky wheel.

Despite our efforts, Isabel’s condition continued to decline. And then – again – it got worse.

In early spring of this year, Isabel contracted COVID-19. Also, her lodge was shut down and she was placed in isolation. I could still visit but I was confined to her room, and I couldn’t even take her the 20-foot distance to a bright, sunny patio.

It was (and is) difficult to understand why, when the rest of the country was almost “back to normal”, LTC homes went back to using the same restraints and restrictions they’d had when the pandemic first began. I would have thought they could, instead, adapt and find other ways to support Isabel and her needs as a person living with Alzheimer’s disease and affected by COVID-19.

Finally, toward the end of May, her LTC home came off lockdown.

Though Isabel was able to recover from her COVID-19 symptoms, she was left considerably weakened by the experience. She is now confined to a wheelchair, no longer able to stand or walk. And her Alzheimer’s disease has progressed to the point where I’m not sure she knows who I am.

We still advocate strongly for support for people living with Alzheimer’s disease and other dementias. Last year, in 2021, Isabel and I were the Victoria-area honourees in the IG Wealth Management Walk for Alzheimer’s campaign, and we used that as a lever to raise over $6,000 to help others with dementia..

As well, I continue to sing with the Voices in Motion choir led by Dr. Debra Sheets. Although Isabel is no longer able to participate, we did take her to our Voices in Motion concert in December 2021. That was her last outing, as she is now too weak to ride in a passenger car.

I am so glad we did what we did, when we did. It’s true the world doesn't end when you have Alzheimer’s – but it does become more challenging.I

You can make a difference

Across Canada, hundreds of thousands of people living with dementia and their care partners, like Isabel and Michael, are facing the unique challenges brought on by Alzheimer’s disease and other dementias – challenges that were intensified by the COVID-19 pandemic.

What’s more, new research is telling us dementia will continue to be a growing issue in Canada. The number of people living with some form of dementia is projected to triple over the next 30 years. If current trends continue, all regions of the country will see a dramatic increase in the number of people with dementia and the demands placed on care partners.

The path forward is clear: Canada, at all levels of government, needs to improve the quality of care and expand support for people living with dementia now, so that people like Isabel can live as well as possible in their dementia journey. 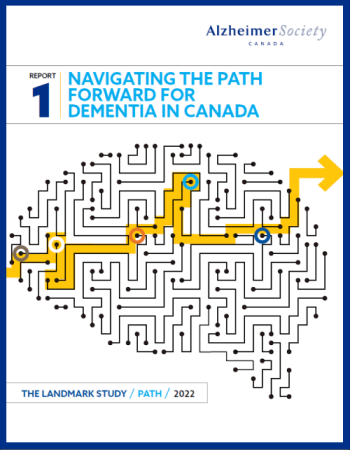 Recognizing the specific needs of people living with dementia; providing social supports to care partners; and growing our capacity for dementia-specialized home, community and long-term care – these improvements, along with other recommendations, can change the future of dementia in Canada.

Read about these recommendations and more from our latest report, Navigating the Path Forward for Dementia in Canada: The Landmark Study Report #1.