Stranger Things, the popular sci-fi show on Netflix, has used a window of opportunity in Season 4 to highlight the benefits of music therapy. In Season 4, episode 4, Max is hunted by Vecna who possesses her and uses visions of her past traumas to evoke fear before causing them to surrender to death, making them believe it is the only resort. In an attempt to bring her back to reality, her friends place her headphones on her ears and begin to play her favourite song. When the song was heard, the power Vecna had dissipated and her trance was broken. Instead of completely submitting to Vecna, she is seen breaking free from his hold and running her way back into reality. Music was used to improve emotional regulation in that stressful situation. Aalbers et al. (2020) would say that the music evoked change in behaviour. 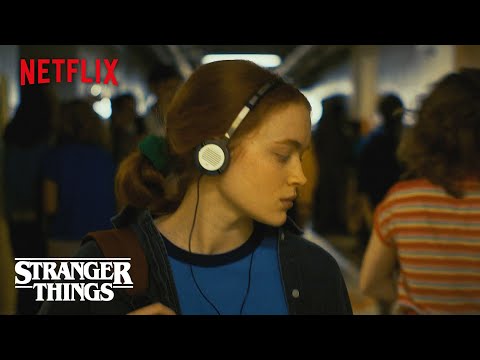 In the same season and episode, Nancy Wheeler and Robin Buckley are given a tour of the Pennhurst Mental Hospital. In one particular scene, they were brought to one of the most popular rooms- the listening room.
A room in which patients have the opportunity to play, and listen to music at their leisure. The head of the hospital, Dr. Hatch mentions “we found that music has a particularly calming effect on the broken mind. The right song, particularly one which holds some personal meaning, can prove a salient stimulus”. This particular line echoes the effect of music with dementia patients- a form of broken mind. Matthews (2015) explains that music has the ability to help those with dementia to re-enter their social world, engage, participate, converse and be responsive to others.  In a study from St. Michael’s Hospital in Toronto(2018), participants who listened to familiar music had a much more extensive pattern of activation in several areas of the brain in comparison to participants who listened to unfamiliar music.

The Alzheimer Society has a program called the Music Project that is specifically designed to bring the benefits of personalized music to people living with Alzheimer’s and other dementias. At no cost to participants, the project provides music players that are pre-loaded with the person’s favorite songs or songs from their era, over-the-ear headphones, charging equipment, and a program guidelines booklet.  In addition, the project provides ongoing support for program participants, including technical support, music updates, and connections to other programs and services in the Alzheimer Society. Applicants interested in the Music Project can apply through the website, at www.musicproject.ca . Sign up through your local region, and fill out the application.

How has music helped you?

Ubelacker, S. (2018). Familiar music from past may give Alzheimer’s patients a cognitive boost, according to study. The Canadian Press.