This year, Isaac wanted to find a way to give back to his community and his peers. That’s why he chose to become a proud ambassador of the Alzheimer Society of Ontario for his innovative Project Give Back Challenge.

“The reason I chose this charity is because my aunt Sheila has Alzheimer’s and now, she lives in a long-term care place called L’Chaim where she receives care for 24 hours a day,” said Isaac. During his presentation, Isaac shared his personal connection to the cause, details about Alzheimer’s disease, and how the Alzheimer Society of Ontario is helping people living with Alzheimer’s disease like his aunt Sheila, through fundraising. 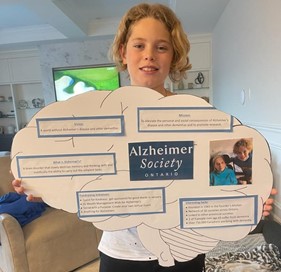 To give the other students an idea of the challenges surrounding living with Alzheimer’s disease or other dementias, Isaac created a memory game. During the game, each student went “shopping” by choosing cards with images of different household items, food products and more. One by one, each student said what they “bought” and the next student was tasked to list all the products that came before their own. This challenging game gave the students an opportunity to test their short-term memory skills and understand what it can be like for those living with dementia.

Isaac is a true representation of why our connections matter. At such a young age, Isaac has inspired us and others to make a difference and with that, Isaac has said, “I hope that in the future, no one will wake up not knowing where they are. . . who they are. . . and the people they love. The only thing that will be forgotten is that Alzheimer’s ever existed.”